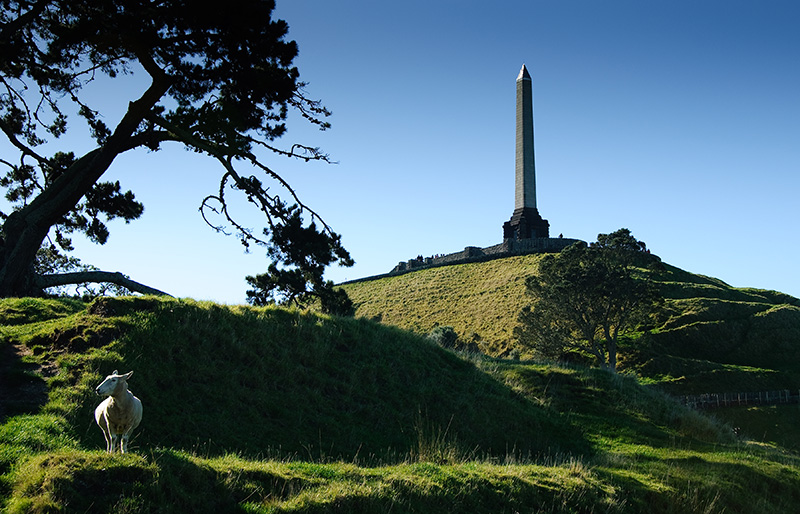 A creepy looking sheep happily poses in front of the summit of Maungakiekie or One tree Hill.
One Tree Hill is one of the largest of the 52 volcanoes in the Auckland Volcanic Field.
The following is the brief story of One Tree Hill as told by Te Ara, the Encyclopedia of New Zealand:
Maungakiekie was given its European name (One Tree Hill) by Sir John Logan Campbell, after a totara tree (Te Totara i Ahua) that stood on its summit. This was felled by a Pakeha settler in the 1850s. Campbell tried to replace the totara with a grove of trees, but only a single monterey pine tree survived. This became an Auckland landmark. After attacks by Maori protesters in 1994 and 2000 the tree was felled in 2001 for safety reasons.

The obelisk was erected for Auckland’s centenary celebrations in 1940, it formed part of the bequest of Sir John Logan Campbell, to commemorate his admiration of ‘the achievements and character of the great Maori people’. Campbell, who arrived as one of Auckland’s pioneer settlers in 1840, lived and worked among local Maori before making his fortune as a general merchant and businessman. He died in 1912 after gifting Cornwall Park to the city, and is buried on top of One Tree Hill.