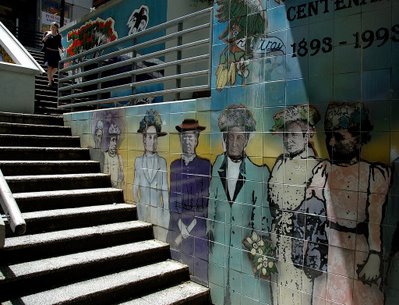 On September 19, 1893 New Zealand became the first self-governing country in the world to grant the vote to all adult women.

This is the suffrage centenary memorial by artists Jan Morrison, unveiled 13 years ago at Khartoum Place, Auckland to celebrate the centenary of women’s suffrage.

In 2005, an architect’s plan for a revamp of Khartoum Place proposed to remove the mural. After a public outcry however, the City Council eventually decided to keep the mural as part of the $2.2 million revamp of the area.

Today, almost 33 per cent of NZ members of Parliament are women (including the PM), and New Zealand has the 15th highest level in the world for women’s representation in national politics.