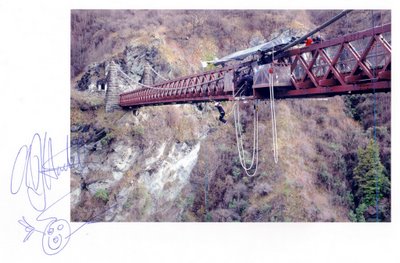 No, this is not Auckland. Is the Kawarau Bridge Bungy near Queenstown on the South Island. The Kawarau Bridge Bungy is home to the original 43-metre Bungy Jump. If you’ve heard of Bungy, you’ve heard of Kawarau. And on the photograph, is the autograph of the man himself: AJ Hackett the quintessential Kiwi who started the Bungy jumping craze. He was signing autographs in an Auckland bookstore today to promote his recently released autobiography: Jump Start, so I got one on a photo Iâ€™d taken last year. And if you wonder what happens when you reach the bottom, check it out at The Final Editâ€¦
The K Road series will continue tomorrow.

2 thoughts on “No, this is not Auckland. Is the Kawarau Bridge Bu…”