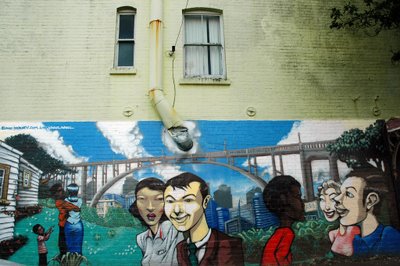 This is a mural of the Grafton Bridge on the wall of a building on a small side street off Park Road. Its interesting to note that although painted in 2002, the bridge is depicted without the glass panels. A bit of history taken from www.viewauckland.co.nz:
“Grafton Bridge was the world’s largest single-span concrete structure in the world when it opened in 1910. But for many decades the bridge served a more tragic purpose for some; it was the site where they chose to end their lives. Poet Yang Lian noted the bridge’s melancholic effect in his poem Grafton Bridge:

Glass panels were installed on the bridge in 1992 in an attempt to stop the jumpers. In 1996, the panels were removed after being deemed too ugly and dangerous to clean. Six years on and the panels were quietly returnedâ€”with positive effect.”

I like the glass panels. They shelter pedestrians crossing the bridge and make the presence of the cemetery below less haunting…